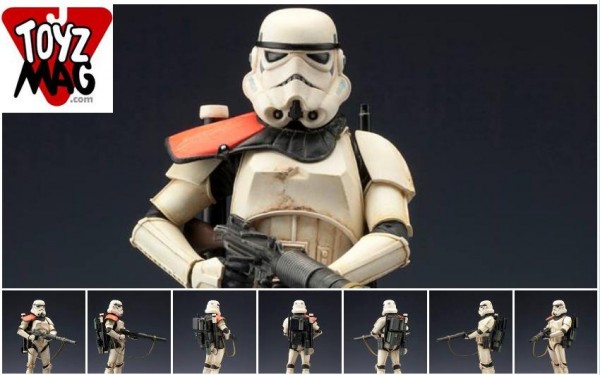 A Kotobukiya Japanese import! Star Wars ARTFX+ Statues bring you all of the quality and detailing that you expect from an ARTFX release in a great smaller scale perfect for collecting! One of the highlights of the line is the inclusion great army builders (in addition to famous heroes and villains) like the previously released Stormtroopers. Up next is the character chosen as part of a fan poll at Star Wars Celebration VI in a double dose of the specialized Imperial trooper designed for maneuvers in desert conditions, the Sandtrooper Squad Leader Two Pack!
First seen in Star Wars Episode IV searching Tatooine for a pair of droids, Sandtroopers use modified Stormtrooper armor and unique weaponry, and as with all soldiers are more effective in greater numbers. The Sandtrooper ARTFX+ Statues replicate their onscreen counterparts perfectly, with intricately sculpted armor that shows off all of the details you know from the film. Notably, they wear the iconic shoulder pauldrons and convoluted backpacks full of desert equipment. Similarly, due to the harsh conditions they operate in the Sandtroopers feature armor scoured and stained brown, further differentiating them from their standard Imperial brothers. In this pack you’ll get enough parts to build two Sandtroopers Squad Leaders with all of their equipment and weaponry, and bonus parts let you assemble and display them in various iconic poses (on the lookout with macrobinoculars, pointing at targets, or wielding either T-21 or RT-97C)! Like all other ARTFX+ Statues the Sandtroopers also have magnets in their feet for display on their included bases.
ARTFX+ Statues are fun-to-assemble pre-painted snap-fit kits that can be easily put together in seconds without glue or modeling skill. The Sandtrooper Squad Leaders stand 7 inches tall (1/10th scale) and are perfect back up for the Sandtrooper Sergeant (sold separately)!