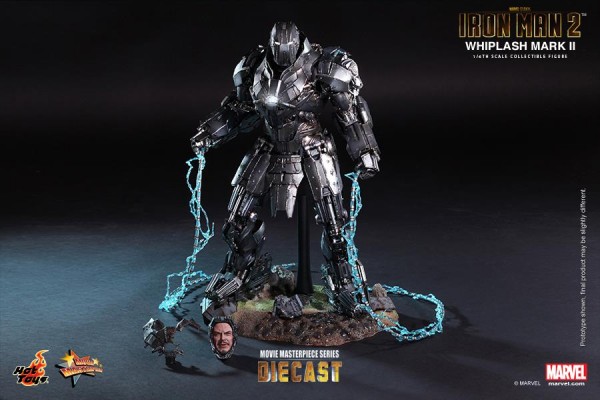 [English version starts here]
At the climax of Iron Man 2, Ivan Vanko appeared in his new Whiplash Mark II armor and proved to be a formidable foe for both Tony Stark and Colonel James Rhodes. The Whiplash Mark II’s incredible mechanical design has left a strong impression for Iron Man fans and since the appearance of collectible figure’s prototype at various Hot Toys exhibitions, fans have been longing for the official reveal of this amazing armor.
Now we are very excited to present this eagerly awaited 1/6th scale Whiplash Mark II Collectible Figure. It will also be the newest addition to our MMS Diecast Series which the collectible figures are made of diecast material, realistically designed to look more like Whiplash Mark II as he appears in the movie. The MMS Diecast Series will take fans to the next level of authenticity, focusing on the materials, fine details and engineering of the collectible figure.
The movie-accurate collectible is specially crafted based on the image of Mickey Rourke as Whiplash Mark II in the movie featuring a helmeted head sculpt with authentic likeness of Mickey Rourke, an interchangeable helmeted head with LED light-up eyes, a magnetic mask, highly detailed mechanical design, metallic black painted full body armor with distressed effect, interchangeable battle damaged chest armor, pair of whips with real-like flashes and light-up function, and a specially sculpted diorama figure base.