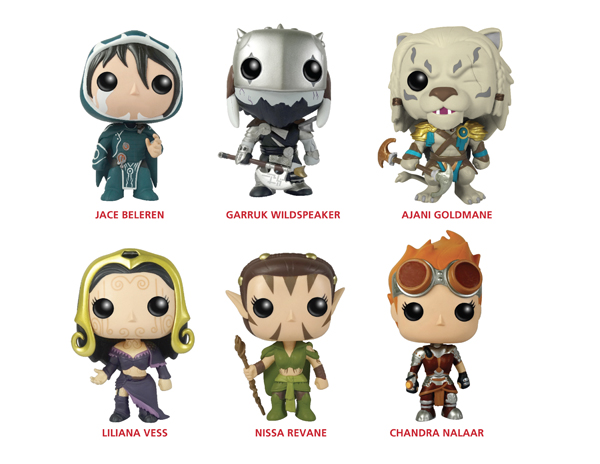 “We are deeply honored and very excited that Wizards of the Coast chose Funko as a partner to develop truly cool collectibles for Magic: The Gathering. I know the fans of Magic have been waiting nearly 20 years to get their hands on some fantastic Action Figures and stylized Vinyl figures. I promise that we won’t disappoint them!” said Brian Mariotti, CEO of Funko.
The first series of Pop! Vinyl figures, set to release in April, will feature iconic Magic: The Gathering Planeswalkers Jace Beleren, Garruk Wildspeaker, Chandra Nalaar, Liliana Vess, Ajani Goldmane and Nissa Revane. Funko Pop! Vinyl figures are 3.75 inch tall super stylized vinyl figures. With over 10 Million sold since 2010, it is the world’s largest line of collectable stylized vinyl in the world.
Funko is also excited to announce that we have teamed up with talented sculptors at Gentle Giant to create Funko’s new Legacy Collection line of deluxe action figures featuring 20+ points of articulation and removable accessories for ages 14+. Set to release in August, the Magic: The Gathering Planeswalkers will be among the first Legacy Collection figures released, and you can expect the same iconic Planeswalkers as those released in Pop! Vinyl.
“We are excited to bring the world’s best strategy game to life with these figures,” said Elaine Chase, Brand Director for Magic: The Gathering at Wizards of the Coast. “Funko has been a great partner, and we’re looking forward to giving players yet another way to enjoy Magic: The Gathering.”
Funko products are available nationwide at Barnes & Noble Booksellers, Toys R Us, Hot Topic, Target, Walmart, 7-Eleven, specialty toy retailers, and online at www.amazon.com.