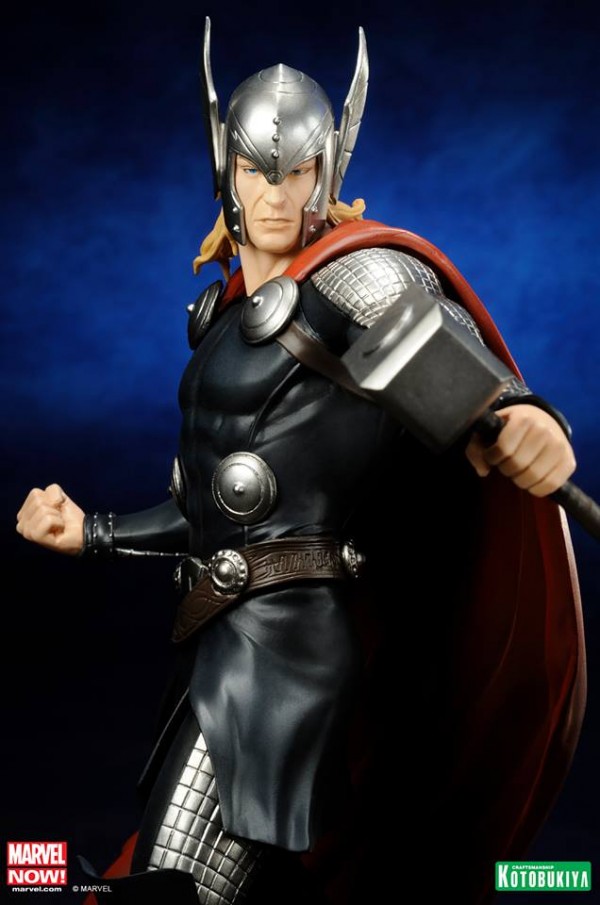 [English version]
A Kotobukiya Japanese import! Marvel Comics is the next great property to get Kotobukiya’s ARTFX+ statue treatment, and so of course the first series is none other than the Avengers, specifically the characters as they appear in Marvel Now! In 2012 the comic book company relaunched several titles, shifting some characters into different books and updating some for a modern audience. More than anything, it provided a perfect jumping on point for new readers. Now the characters are brought to life as never before based on concept artwork by superstar artist Adi Granov. Joining his previously released teammates the Hulk, Black Widow, Captain America, and Hawkeye is the Asgardian warrior Thor!
In 1962 comic book mastermind Stan Lee set out to create a new superhero, one who was incredibly powerful. He found such a character in Norse mythology, the god of thunder. A true champion of good, Thor has fought beside many other Marvel Comics superheroes throughout the years, including several incarnations of the Avengers. He has even starred in two feature films as well as the ensemble Avengers movie! In the Marvel Now Thor continues to fight the good fight in his own book as well as with his fellow Avengers that are gathered in this ARTFX+ series as Earth’s Mightiest Heroes. Always eager for glorious combat, the Asgardian is captured in a relaxed battle stance, turned sideways and holding out his hammer Mjolnir in front of him. Thor wears his distinctive Marvel Now costume that combines a black tabard with silvery armor, an ornate helmet, and a sweeping red cape!
Sculpted by the same master artist who did the rest of this Avengers series, Junnosuke Abe, Thor stands nearly 8 ½ inches tall (in the ARTFX+ 1/10th scale) on his included magnetic display base. Whether by himself or displayed alongside the other Avengers in the Marvel Now ARTFX+ collection Thor is ready to lead the fight!
Available October 2014