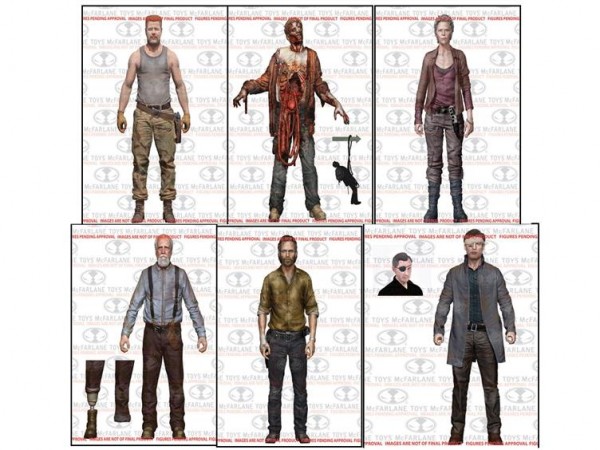 Cette série est encore conditionnelle et sa forme (et le nom des persos qu’elle comprendra) peut encore évoluer. Elle est prévue pour octobre 2014 et comprendra normalement :
Abraham Ford
Introduced in season 4, Abraham Ford and his traveling companions are on route to Washington D.C. with valuable information pertaining to the outbreak. This former Sergeant in the U.S. army attempts to enlist the help of Glenn, and his companion Tara, on their quest to the capital. Abraham and his group end up joining Glenn in the search for Maggie and eventual trek to Terminus. This figure comes with approximately 22 points of articulation, pistol, SMG, and combat knife.
Bungee Guts Zombie
The first episode of season 4 was certainly full of surprises. Making a run for supplies, a group of survivors enter a nearby store, without knowing dozens of walkers and a downed helicopter was on the building’s roof. The rooftop eventually gives way and walkers start raining from the ceiling. Fortunately not all the walkers made it down…The iconic Bungie Guts Walker is seen dangling by his guts and intestines, leaving the survivors speechless. This figure features removable intestines and can stand or be hung by his guts.
Carol Peletier
One of the few survivors from the original Atlanta group, Carol Peletier knows what it takes to stay alive. Over four seasons, fans have watched her evolve from a kind-hearted and soft-spoken wife and mother, to an independent survivalist trying to protect those around her at any cost. After losing her daughter Sofia in season 2, Carol dedicated her time at the prison teaching the younger group members how to survive. This figure comes with approximately 22 points of articulation, knuckle knife, « story time » knife set, and gas can.
Hershel Greene
An advisor to Rick and father of surviving daughters Maggie and Beth, this beloved character has left an eternal impact on The Walking Dead series. Hershel Greene was introduced as the man who saves Rick’s son Carl’s life in season 2. A farm owner and defender of moral codes, he served as a confident and skilled diplomat within the group of survivors. After being bitten by a walker in season 3, Rick is forced to cut off Hershel’s leg to stop the infection – adding yet another challenge to his life. This figure comes with approximately 22 points of articulation, crutches, alternate amputated leg, alternate prosthetic leg, and alternate head with bandana.
Rick Grimes
A former police officer, Rick Grimes has always been a leader amongst the group of Atlanta survivors. Over the seasons, his personality has evolved as he continuously tries to relinquish leadership in order to protect his own family. After numerous threats and the loss of his wife Lori, Rick is in a continuous battle both mentally and morally. This version of Rick depicts the wear and tear the apocalyptic world has taken on this once upholder of the law. No longer fighting his destiny, Rick appears ready to take on this challenges head on in season 5. This figure comes with approximately 22 points of articulation, revolver, suppressed pistol, machete, D-rings, and hoe.
Governor With Long Coat
The once leader of the seemingly utopian town of Woodbury, The Governor has lost everything: the town he built; his daughter turned walker; and his eye at the hands of Michonne. Longing for revenge against Rick and his group of survivors, The Governor rose from the ashes of defeat to become an even more dangerous foe for anyone or anything that stands in his way. This figure comes with approximately 22 points of articulation, eye patch head, bandaged head, and automatic rifle.