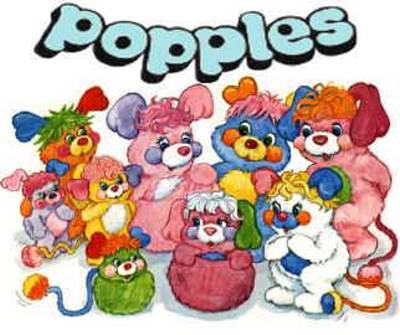 Saban Brands Names Spin Master Ltd. As Global Master Toy Licensee For Animated Children’s Franchise, Popples
LOS ANGELES, June 16, 2014 /PRNewswire/ — Saban Brands announced today a new licensing partnership with Spin Master Ltd., Canada’s largest children’s toy and entertainment company, who will serve as global master toy licensee for the company’s iconic and re-imagined Popples brand. Slated to launch in 2015, Popples is a new animated children’s series based on the nostalgic characters from the popular 1980’s toy line and television series. Spin Master will produce a full range of children’s toys including small dolls, collectible figures, playsets and plush to hit the U.S. market in 2015, followed by an expanded international program in 2016.
« We are thrilled that Spin Master, a global leader in the toy industry, will serve as the master toy partner for our Popples property, » said Elie Dekel, President of Saban Brands. « With a contemporary design, all-new characters and a wonderful line of toys, an entirely new generation of kids will get the chance to enjoy the hilarious, adorable and wacky adventures of the lovable Popples. »
The new Popples show is a high-energy comedy series about an amazing species of creatures that can pop into and out of a ball at will. The story is driven by the optimistic comic enthusiasm of the Best Popple Pals (BPP’s): Bubbles, Sunny, Lulu, Izzy and Yikes. Always wanting to help their friends, neighbors and each other, the BPP’s efforts often time backfire in hilarious ways, but luckily they always manage to save the day in their own POP-tastic way!
« We are pleased to partner with Saban Brands to relaunch the Popples property and bring to life the adorable new characters and whimsical world of the series, » said Craig Sims, Vice President Licensing and Business Development at Spin Master. « The Popples toy line will have a fresh modern look and feel inspired by the original design, which is sure to bring joy to millions of children around the world. »
Originally introduced in 1985, Popples made their debut in the U.S. with a successful toy line that generated more than $444 million in retail sales, followed by a Saturday morning television show based on the toys. As one of the best selling plush in history, the soft, lovable Popples creatures transformed from fluffy balls to furry friends and back again, making them an instant hit among fans of all ages.
About Popples
Popples are fun, lovable, brightly colored and adorable creatures that transform from fluffy balls to furry friends and back again. Saban Brands will re-imagine the franchise for a new generation of kids with an all-new animated series in 2015. The show will be a high-energy comedy series, driven by the optimistic comic entertainment of its main characters, or Best Popple Pals (BPP’s): Bubbles, Sunny, Lulu, Izzy and Yikes. Popples made its original debut in the U.S. in 1985 with a successful toy line, followed by a Saturday morning television show based on the toys. Visit www.sabanbrands.com for more information.
About Saban Brands
Formed in 2010 as an affiliate of Saban Capital Group, Saban Brands (SB) was established to acquire and develop a world-class portfolio of properties and capitalize on the company’s experience, track record and capabilities in growing and monetizing consumer brands through content, media and marketing. SB applies a global omni-channel management approach to enhancing and extending its brands in markets worldwide and to consumers of all ages. The company provides full-service management, marketing, promotion and strategic business development for its intellectual properties including comprehensive strategies unique to each brand, trademark and copyright management and enforcement, creative design, retail development, direct-to-consumer initiatives and specialized property extensions. SB’s portfolio of properties currently includes Power Rangers, Paul Frank, Julius Jr., Digimon Fusion and Popples, among many others. For more information, visit www.sabanbrands.com.
About Spin Master Ltd.
A multi-category children’s entertainment company, Spin Master has been designing, developing, manufacturing, and marketing consumer products for children around the world since 1994 and is recognized as a global growth leader within the toy industry. Spin Master is best known for such popular brands as boy’s action phenomena and 2009-2010 Boy’s Toy of the Year winner Bakugan Battle Brawlers™, and award-winning brands Air Hogs®, Aquadoodle™, Flutterbye™, Spin Master Games™ including 2014 Game of the Year, Boom Boom Balloon ™ and the popular Hedbanz™, SpyGear™, Tech Deck™, and the 2014 Innovative Toy of the Year Zoomer™. The company has also marked an entry into children’s media with the launch of Spin Master Entertainment, a subsidiary focusing on the design, development and production of television and other media properties, including the hit animated preschool series, PAW Patrol™. Spin Master employs over 900 people with offices in Toronto, Los Angeles, London, Paris, Hong Kong, Mexico City, Munich, and Milan. For additional information please visit: www.spinmaster.com.
SOURCE Saban Brands