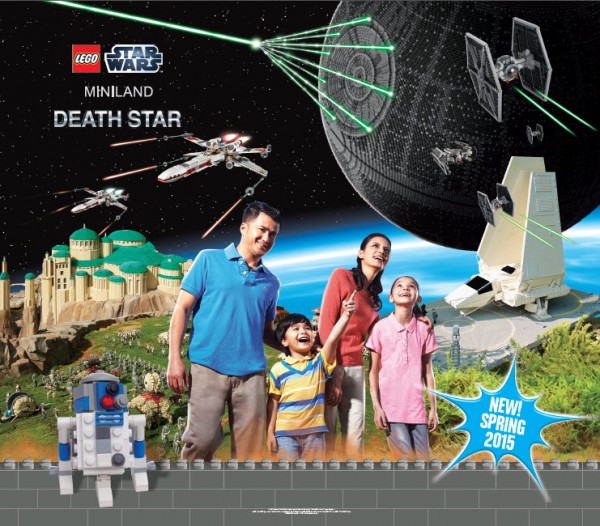 CARLSBAD, Calif. (November 6, 2014) – A galaxy far, far away and some new Friends took center stage as LEGOLAND® California Resort announced two major additions for 2015 at the annual press conference. General Manager Peter Ronchetti shared  the family theme park’s 2014 successes before announcing  the LEGO® Star Wars™ Miniland Death Star is arriving in time for spring break and an entirely new area, Heartlake City, based on the popular LEGO® Friends product, is opening before summer.
“This is our tenth straight year of continuous attendance growth and much of this can be attributed to providing our guests with a fun, family environment to enjoy unique interactive experiences and create family memories,” said Ronchetti.
“In 2011 we were the first LEGOLAND in the world to open LEGO Star Wars Miniland and the success and popularity that it has had throughout the years is out of this world,” said Ronchetti. “Our guests have asked us to bring the Death Star to the experience, and we’re excited to be able to do that next year!”
Opening March 5, 2015, LEGO Star Wars Miniland Death Star spans 6-feet across and offers guests the chance to view iconic film scenes made of LEGO bricks that were filmed inside the Galactic Empire’s space station. This includes the famous trench run scene where Luke Skywalker maneuvered his X-wing fighter through the combat zone and trench to blow-up the station and its planet destroying super laser. LEGO models of Stormtroopers, a Rebel X-wing fighter pilot and an Imperial Star Ship pilot will be on display. Guests can also use their imaginations to construct their own LEGO spaceships at building stations.  LEGO Star Wars Miniland Death Star is opening just before the Park’s annual LEGO Star Wars Days happening March 7 and 8, 2015.

“With all the success we’ve had over the years, we continue to work harder than ever to outdo ourselves each year by creating attractions that immerse guests into LEGO Group’s popular intellectual properties,” said Ronchetti. “Last year we made a huge splash with the addition of the LEGO Legends of Chima Water Park presented by Cartoon Network and this year we are excited to continue that trend with the addition of LEGO Friends Heartlake City.”
LEGOLAND California is making a significant investment in LEGO Friends Heartlake City, opening summer 2015. The new area is based on one of the LEGO Group’s hottest toy lines “LEGO Friends”, which focuses on the lives and personalities of five girls: Mia, Olivia, Andrea, Stephanie and Emma. The new area invites guests to sing along with Andrea at her tour bus, stroll through LEGO horse stables, enjoy a building activity at one of the LEGO brick tables and go for a horseback ride on the carousel in Mia’s family ranch.  The adventures are endless for guests as they enjoy living like LEGO Friends for a day in Heartlake City.
The LEGO® Star Wars™ Miniland Death Star and the new LEGO® Friends Heartlake City are included in the cost of admission to LEGOLAND California Resort. For ticket prices, operating schedule and additional information, visit www.LEGOLAND.com or call 760-918-LEGO (5346).