A KOTOBUKIYA Japanese import! Kotobukiya’s Marvel Comics ARTFX+ Statues have brought you Earth’s Mightiest Heroes in the Avengers as well as the heroic mutants of the X-Men. The latest series of high quality 1/10th scale ARTFX+ figures celebrates iconic characters appearing in Spider-Man titles, and up next is the Marvel Now! incarnation of the bonded alien symbiote: AGENT VENOM! After being used by anti-hero Eddie Brock and the villain Mac Gargan, the Venom symbiote was captured by the U.S. government for use in a secret military program. It was assigned to none other than Eugene “Flash”Thompson, a character who first appeared bullying Peter Parker in high school all the way back in 1962 but who more recently served with distinction in the Army. Agent Venom fought supervillains on Earth and in deep space along with the Guardians of the Galaxy, and now the symbiotic hero joins the Spider-Man lineup in an amazing ARTFX+ Statue presentation based on artwork by Stefano Caselli!

Embarking on a secret mission, Agent Venom stalks his prey using stealth and military training. Flash sneaks along in a deep crouch with twin pistols held up at the ready as he pivots to check for targets. The symbiote provides excellent armor protection over a standard issue outfit, and Venom is outfitted with a sleek black bodysuit with heavy combat boots and chitinous armor plating protecting the agent’s torso, lower limbs, shoulder, and collar. Flash also wears a belt carrying additional equipment and two more pistols in holsters, and his bodysuit extends over his head in a sleek black hood with white eye outlines. That bright white is also seen at strategic places on Venom’s suit: rectangles on the back of the hands, outlines on the thighs, and of course spider symbols on the chest and back. Everything about the stance and equipment screams precision and deadly intent, down to the exacting details like Flash’s trigger discipline. Agent Venom stands under 7 ½ inches tall (in the ARTFX+ 1/10th scale) in his crouching pose and was sculpted by the same artist responsible for the Marvel Now! Avengers, X-Men, and Spider-Man series, Junnosuke Abe (RESTORE). And as with all ARTFX+ releases magnets in his feet provide perfect stability on the included display base. Agent Venom will look great stalking his prey in your collection whether he operates alone or stands alongside other members of the ARTFX+ Spider-Man Family series! 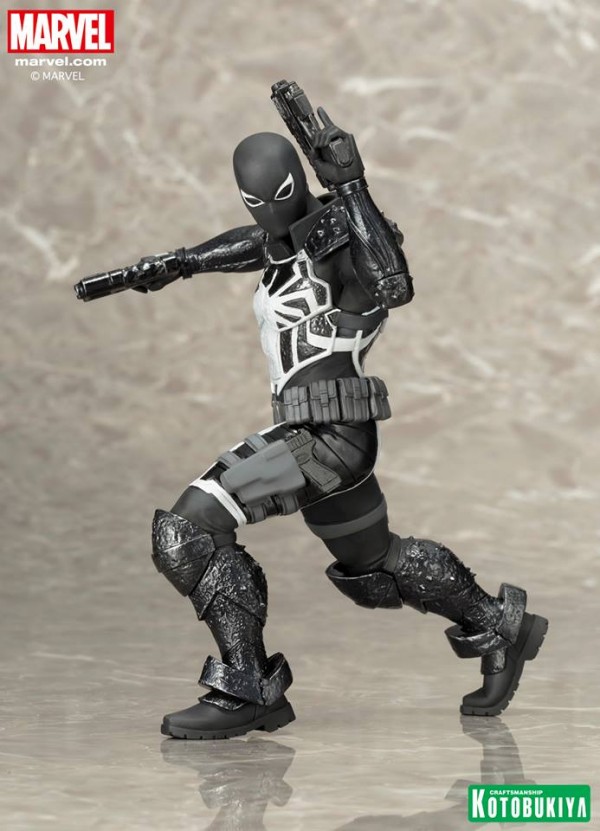 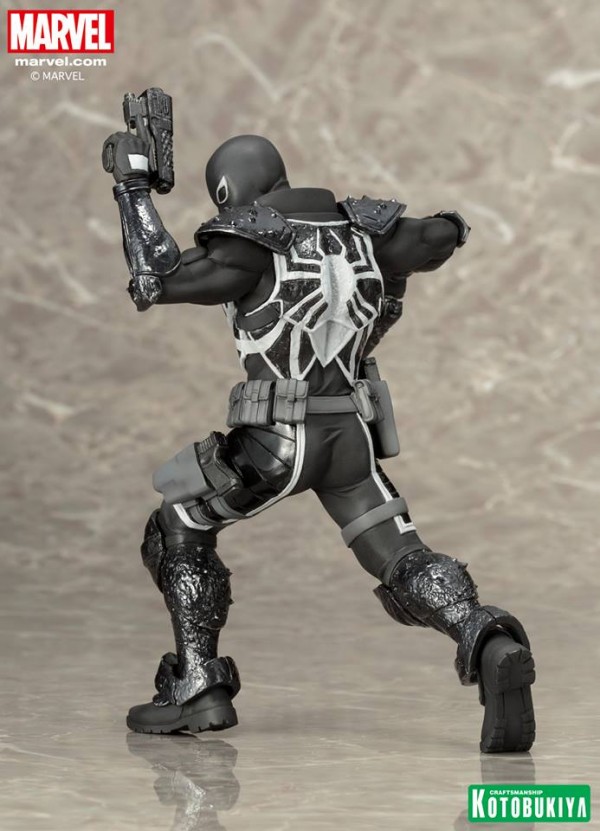 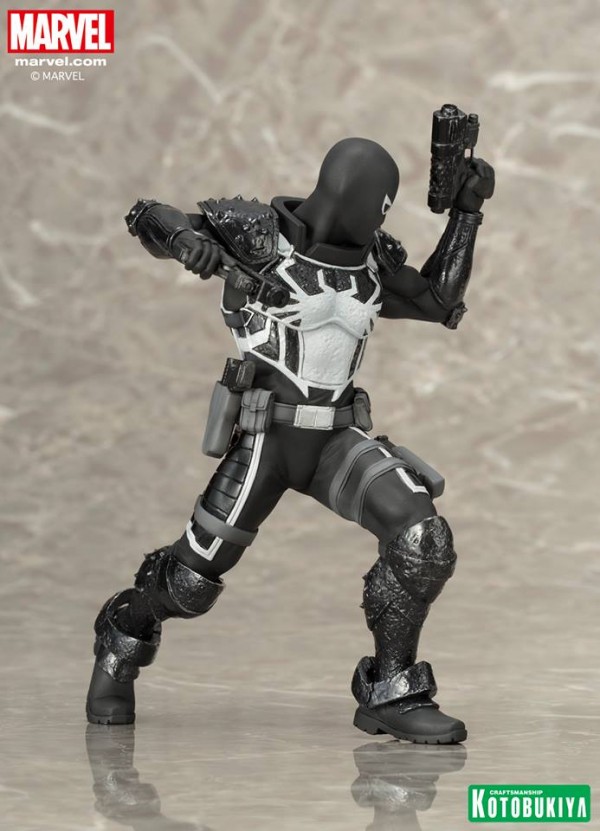 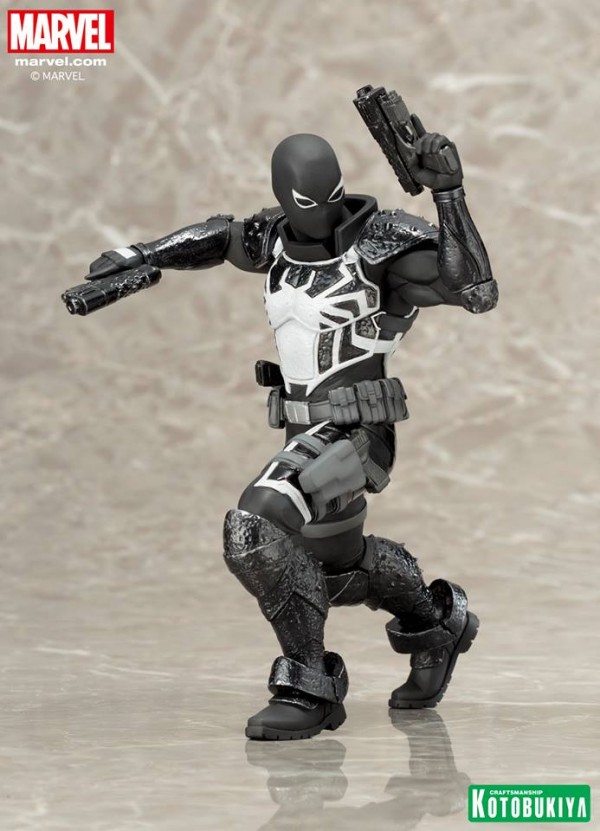 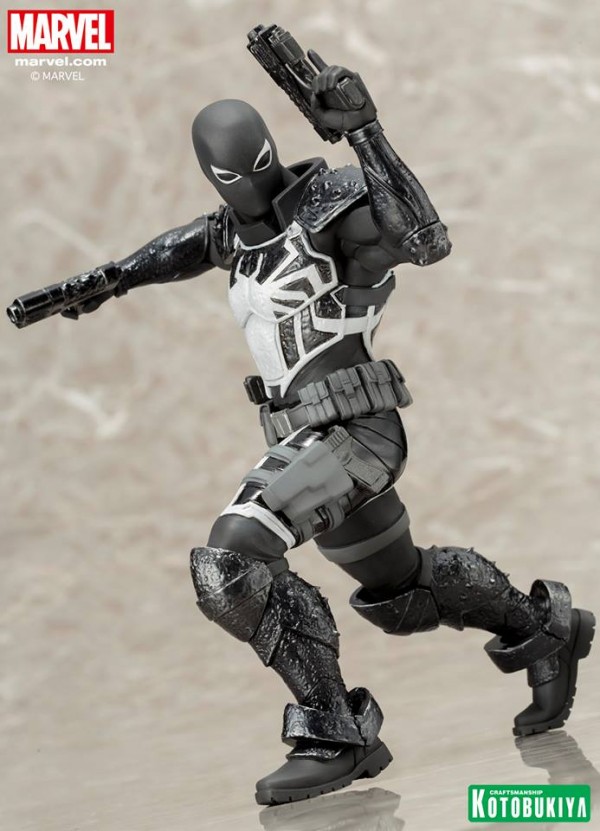 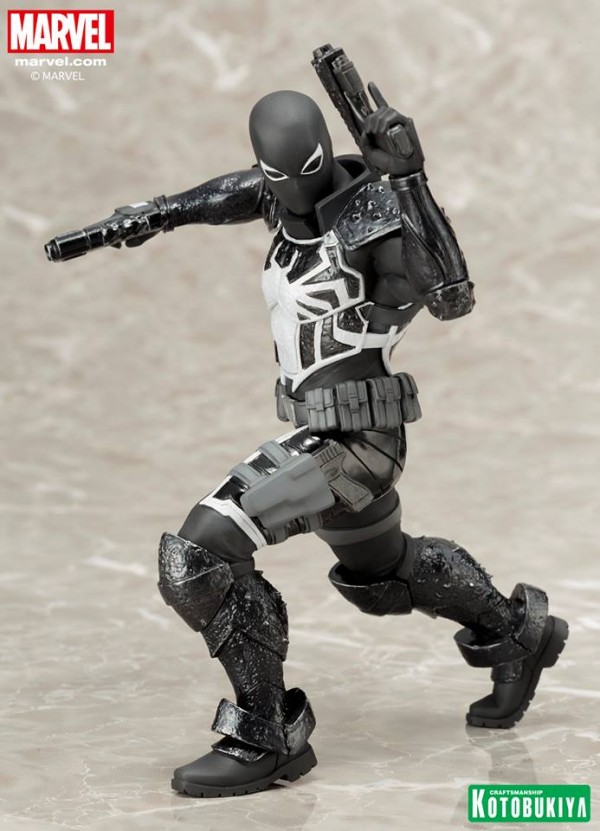